When the PR agency for a major global car company needed robust, resilient satellite and integrated Wifi communications to support national motoring media covering a drive across remote and wild regions of Scotland they turned to Primetech for a unique and pioneering solution.

A Primetech-supported media communications vehicle, equipped with a newly developed C-COM/Avanti Ka-band satellite solution, was used to provide reliable voice and data communications for a high profile off-road media expedition in remote Scottish locations. In the process, deployment of the system provided proof of concept for an advanced new combined satellite signal solution for accessing two satellites, delivering improved resilience. The system has a wide variety of other applications. 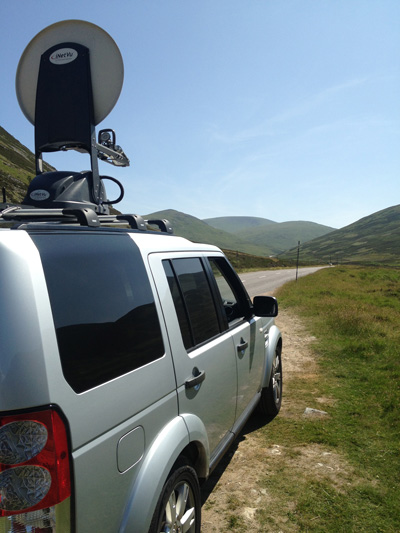 When Sky News wanted to set up a new fleet of Land Rover Discovery news gathering vehicles capable of making high bandwidth news broadcasts back to the Sky News centre they approached Primetech for advice. Primetech initially provided equipment to Sky for evaluation. The evaluation process took into account such things as the sturdiness of the satellite system units, whether they were susceptible to weather conditions, were they responsive to wind, whether they would stand up to difficult conditions, and were they easily deployed and managed by non-technical television reporters.

According to Primetech’s Henry Walker, ‘They passed all of those hurdles with flying colours and Sky News has now bought systems and has installed them on a brand new fleet of 7 vehicles.’

Primetech has supplied and is supporting a Ka-band satellite system for Blackthorn Production in Northern Ireland. This new installation, which has been used very successfully to support outside broadcasting (OB) in the province, builds on Primetech’s existing work for Sky News, where it is supplying a number of satellite systems for use by UK newsgathering teams based in Land Rover vehicles.

According to Henry Walker of Primetech, ‘This new and rapidly evolving and expanding form of low-cost outside broadcasting, using the vast new capacity and ease of use of Ka-band systems supplied by C-COM, combined with the power of internet television, is helping to drive completely new types of outside broadcasting.  This is allowing organisations to broadcast which would have previously been prevented from doing so by high barriers to entry, especially equipment cost.'

‘In the spring of 2013, we purchased an iNetVu KA 75V system for our new OB unit. We went with the KA 75V and TooWay to suit our connection needs for transmitting audio.  The unit itself is very compact and lightweight, which is suitable for mounting to the roof of a van. It only took two of us and a stepladder to place it there.  Its control interface only takes up one U in a conventional rack, leaving us plenty of space for the remainder of our broadcast chain.