Kendal Mountain Rescue Team has acquired a new Primetech-supplied MultiNet satellite system to support its rescue operations in South Cumbria and the Howgills. With a team of around 40 volunteers, and a number of off-road vehicles and other equipment, the team relies heavily on reliable communications to support its life-saving work, often under very challenging conditions.

The addition of the Ka-band portable satellite system is now a key element in the team’s operations as it relies heavily on two web-based systems - SARCALL and MRMAP.

According to Phil Allen, a member of the team and radio communications officer, ‘Kendal Team’s operational patch has several mobile data blackspots, so having the ability to deploy a vehicle with mobile satellite broadband onboard allows the team to operate both SARCALL and MRMAP systems within these blackspot areas.

‘The MultiNet system is very well built, with consideration given to waterproofing and corrosion resistance. We have operated the system in moderate wind conditions with a good stable broadband connection maintained throughout. 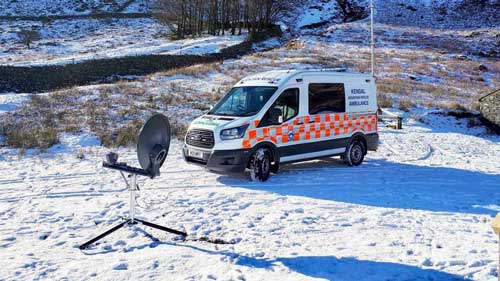 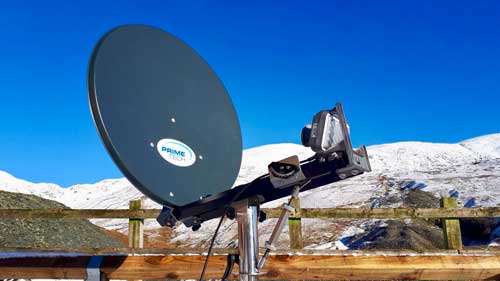 ‘We’ve been using Primetech’s MultiNet satellite internet system for a couple of years and it has proved its worth many times in our more remote areas.
But more recently we’ve incorporated it into our new control vehicle with a small modification to the modem Peli-case, introducing a weather-proof RJ45 connector which allows us to have the modem hard-wired into the vehicle’s network for improved connectivity.
The new control vehicle has a repeater linked to other repeaters on a network via the internet, so a good stable internet connection was vital. It’s quite amazing to think that a simple two-way radio communication between base and a team member in the remotest of locations is actually travelling via satellite.’
Kendal Mountain Rescue Team

‘We have run various training sessions and have developed a pictorial assembly guide that works very well. Setup time is usually about 10 minutes. The system also came with high quality storage cases, so I can only say “Excellent Quality Control of the final product”.’

Swaledale Mountain Rescue Team who operate in remote and inaccessible areas of the Yorkshire Dales, where there is limited 4G access, has also invested in a MultiNet mobile satellite broadband system supplied by Primetech.

According to Steve Clough, rescue controller, the MultiNet ‘system is an invaluable addition to our operational capability, particularly for a service where often every second counts.’