An innovative new passenger extraction training vehicle, which helps emergency crews learn how to deal with safety systems such as airbags and side impact safety systems, is being sponsored by Primetech and Operation Florian, along with Toyota.  The vehicle will be used for live demonstrations on the Primetech stand at the Emergency Services Show in September (stand G70). 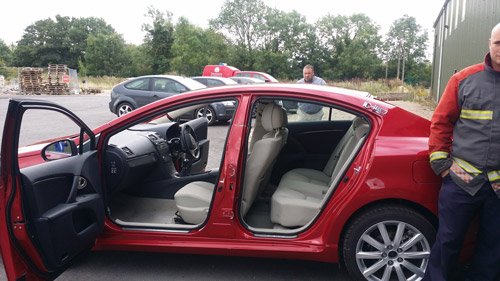 The SES Toyota training vehicle, which is being sponsored by Primetech and Operation Florian, has been produced to educate and train emergency personnel to be safe around vehicles after Road Traffic Collisions.

Vehicle safety plays an important role during a Road Traffic Collision (RTC). During an RTC, the vehicle safety features protect the occupants of the vehicle upon impact, but they can also put the emergency services at risk once they are attending the accident. The police, fire and rescue services, doctors and paramedics are at risk of injury while at a scene attending casualties in the vehicles involved.

Vehicles’ safety systems are still live even after an incident has occurred. This is because there may be another accident after the initial one. Therefore only certain airbags are set off by the vehicle’s control unit, i.e. those which are appropriate for the initial impact.

The features around the vehicle that help save occupant’s lives are:

Thankfully there is now a vehicle which is available in the market to use as a training aid for emergency services personnel and to educate the communities around the country. It is known as the SES Vehicle.

There have been certain scenarios where a vehicle has been in a collision and fire service personnel and paramedics have leant over to the driver through either side of the vehicle, and as they have reassured the occupants of the vehicle by leaning into the vehicle and taking a step back from the car, a curtain airbag has been deployed.The vehicle is, in effect, still live. 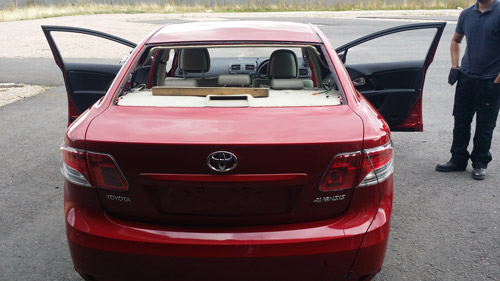 The SES vehicle has been produced to educate and train emergency personnel in order for them to be safe around a vehicle after an accident. Most emergency personnel may have not seen an airbag go off, and this vehicle demonstrates airbag deployment and other key safety features around the vehicle.

Currently the Derbyshire Fire & Rescue is using the vehicle produced by Safety Engineering Simulators Ltd to provide the emergency services with a training aid. The SES vehicle uses a compressed air system to deploy the airbags, which can be repacked and used again. The compressed air system uses the current Breathing Apparatus cylinders located at most stations across the country. One BA cylinder can be used for 7 airbag deployments before the cylinder needs to be recharged.

Henry Walker of Primetech said: ‘We are delighted to be able to support this very worthwhile project, and we hope visitors to the Emergency Services Show will come to see it being demonstrated on our stand. Not only do we think this is a very positive and innovative development for improving public safety, but we also believe it works in perfect harmony with some of the roles that can be preformed by the Cobra Rapid Response Strike Vehicle, with the Coldcut Systems Multi Purpose Nozzle. The Cobra vehicle is perfect for traveling to Road Traffic Collisions very fast, carrying powerful RTC firefighting capabilities, with the Multi Purpose Nozzle being able to dispense water and foam at a very fast rate.’